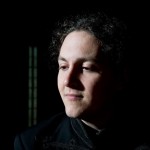 Over the past several years he has succeeded to wipe off the dust from the organ, and establish a new reputation for this instrument. He enjoys a hugely varied performing career on a diverse spectrum of keyboard instruments including, organ, piano, harpsichord and his special instrument: the harmonium d’art.

Balázs Szabó began his musical studies at the age of 15, graduated from the Liszt Academy of Music in Budapest and went on to continue his studies in Germany and Italy.

In 2010 he received the master organist title from the University of Music Wuerzburg with the mentoring of Prof. Dr. Christoph Bossert, and also concluded the only existing International Master for OrganExperts in Rome and Trossingen.

He won first Prizes at three renowned international organ competitions: in St. Maurice (2007 Swiss), Biarritz (2009 France) and 2011 the most prestigious and longest running organ festival in Germany: the Internationale Orgelwoche Nürnberg ION. He received the City of Miskolc Standard of Excellence Award, and the Junior Prima Prize.
In November 2014, he gains the second equal prize of the international competition of Chartres.

Since 2011 he holds a teaching position at the Liszt Academy of Music in Budapest and since 2013 also at the Béla Bartók conservatory.

More informations about Balázs SZABÓ can be found at his website.