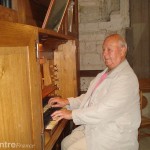 André Pagenel studied music at the Instituts for young blind in Paris, under André Marchal, Gaston Litaize, Antoine Reboulot and Jean Langlais. At the same time, he practised the piano with Vlado Perlemutter.

At 21, he got his teaching ability certificats, the Repertoire Prize Maurice Blazy and André Marchai and first prizes in piano, organ, composition, harmony and counterpoint of the I.N.J.A.

He has also been organ master at the local Academy of Music since 1968.

He gives classes of interpretation in France, Germany, Switzerland, U.S.A. and participated in juries for organ competitions.

Artistic Director of the organ Festival «The very rich hours of the organ in Berry», he recorded a dozen records, cassettes and CDs…