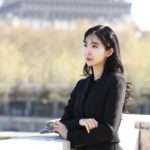 SeoYoung CHOI was born 1993 in Busan (South Corea), she succeded her A-levels at the High School for fine Arts in Busan (2012) and studied organ from 2012 to 2016 at the Yonsei University in Seoul under the direction of Mrs. Dong Sun Kwak. During the 50th edition of the Keimyoung organ competition she obtains the Great Prize, in the same year she also wins the 4th Kookmin & YoungSan-Hall competition in South Corea; she has given several recitals throughout her country.

In 2016 she moves to France to study organ at the Regional Conservatory in Saint Maur-des-Fossés where she completed her 4th postgrade improvement cycle in June 2017, unanimously noted ‘Very good’ by the jury, obtaining also the “André Monsaingeon” organ prize. She is admitted to continue her organ studies at the CNSMD in Paris in the master-class for interpretation under the direction of Michel Bouvard and Olivier Latry.

Since 2018 she studies harpsichord under the direction of Bibiane Lapointe at the Regional Conservatory in Boulogne-Billancourt.

Regularly she is giving recitals as a soloist in France an abroad, but she also plays with various ensembles.

SeoYoung CHOI is appointed organist at the parish Montparnasse-Plaisance since 2017, accompanying also the Allegretto-Plaisance Choir.