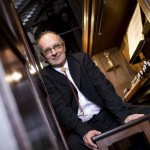 Michel Bouvard was born in Lyon in 1958. His grandfather Jean Bouvard, also from Lyon, an organist and composer who had been a student of Louis Vierne, Florent Schmitt and Vincent d’Indy, inspired him with a great passion for music.

He began studying the piano at a young age in Rodez. Following organ studies with Suzanne Chaisemartin in Paris, he was accepted into the organ class of André Isoir and the classes of harmony, counterpoint and fugue at the Conservatoire National Supérieur de Musique in Paris. While serving as deputy organist of Saint-Séverin church, he perfected his studies with Michel Chapuis, Francis Chapelet and Jean Boyer, after which he became titular organist of this beautiful parisian instrument for more than ten years.

In 1983, Michel Bouvard obtained the premier prix of the international organ competition in Toulouse dedicated to French music of the 17th and 18th centuries. Succeeding Xavier Darasse as professor of organ at the Conservatoire National de Région de Toulouse in 1985, he pursued Darasse’s efforts in favor of the patrimony of the city and the region by organizing concerts, visits, master-classes, and the international organ competition with his colleague Jan Willem Jansen. This work culminated in the creation of the renowned festival “Toulouse les Orgues” of which he served as director for four years, and the new organ class of the “Centre d’Études Supérieures de Musique et de Danse de Toulouse” founded by Marc Bleuse.

Michel Bouvard’s reputation as concert organist and teacher has taken him to over 20 countries, and he is frequently sought after as adjudicator for the most prestigious organ competitions. He has served for four years as a member of the “Commission Supérieure des Monuments Historiques”.

In 1995, he was named professor of organ at the Conservatoire National Supérieur de Musique in Paris, and in 1996, titular organist of the historic Cavaillé-Coll organ of the Basilique Saint-Sernin in Toulouse.