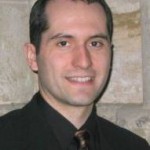 Born in 1974 in Cholet, Marc Chiron began his musical training in his home tocan before attending the Conservatory in Nantes where he studied organ, piano and composition, as well as music analysis and history of music.

Then he became a student at the CNSM in Paris, where he graduated with full honors in 1997 (diploma of the Superior Training Class), obtaining also the First Prize in Organ ( classes presented by Michel Chapuis, Olivier Latry, Michel Bouvard and Loïc Mallié), as well as in Basso Continuo and Renaissance Polyphony.

In 2000, he reached the final round at the International Organ Competition ‘Grand Prix de Chartres’.

He frequently presents recitals all over France and abroad. In Paris, he performed several contemporary works at the church of St. Eustache and the Champs-Elysées Theater.

He bas recorded works with numerous ensembles and soloists. Recently, he was appointed titular organist at the Montauban Cathedral.