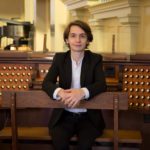 Karol MOSSAKOWSKI is renowned for both his interpretation and improvisation skills. He has shaped his deep musical personnality since the age of three, when he began to study the piano and the organ with his father. After musical studies in Poland with Elżbieta Karolak and Jarosław Tarnawski, he entered the organ, improvisation, and composition classes at the Conservatoire National Supérieur de Musique et de Danse de Paris as a student of Olivier Latry, Michel Bouvard, Thierry Escaich, Philippe Lefebvre et László Fassang.

In 2014-15 Mossakowski was appointed Young Artist in Residence at Cathedral of St. Louis King of France in New Orleans (USA), where he performed many recitals and taught interpretation and improvisation lessons.

For Karol Mossakowski it is essential to support living music thanks to improvisation, to which he gives an important role in his recitals and develops by accompagnying silent films. Thus, much sought for his improvisation talent, he recently performed ciné-concerts at La Rochelle’s International Film Festival, or at the Festival Lumière in Lyon during which he improvised on Dreyer’s Jeanne d’Arc at Lyon’s Auditorium. In 2017 he released a DVD of this performance on Gaumont-Pathé.

He is titular organist of Lille’s Cathedral, and teaches organ and improvisation at the Hector Berlioz Conservatory in Paris.