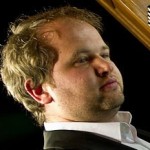 Johannes Unger, born in 1976 in Schlema, East Germany, was marked in his early life by his musical parents. He received a complete musical training at the Special School for Music in Halle, which he then continued at the Academy for Music and Theatre “Felix Mendelssohn Bartholdy” in Leipzig. He studied organ with Ullrich Böhme, organist of St Thomas Leipzig, and piano with Markus Tomas. He continued his studies in the solo class of Hans Fagius at the Royal Conservatory of Music in Copenhagen until 2001. Furthermore he attended master classes conducted by Emanuel Ax, Christian Zacharias, Robert Levin and Ewald Kooiman.

He has performed in Germany, Denmark, the Netherlands, Spain, Australia, Hungary, France, Slovakia, the United Kingdom, and the U.S.A. (represented by Phillip Truckenbrod Concert Artists). He was invited to perform at famous festivals (Leipzig, Eisenach, Frankfurt, Chartres, Monaco, and Haarlem).

Johannes Unger is organist for the Thüringischer Akademischer Singkreis and accepts invitations from other excellent ensembles. Among these are the Dresdner Kammerchor, Dresdner Kreuzchor, Sächsisches Vocalensemble, and the Leipziger Universitätschor

Together with the pianist Christian Meinel he has dedicated himself to piano duets. First Prizes in the “Youth plays music” competitions, numerous recitals, and a CD production testify to this successful collaboration. His first solo CD, released in 2001, was recorded on the Silbermann organ in Rötha, near Leipzig.

Furthermore, Johannes Unger is leader of the Steering Committee for the rebuilding of the large organ in St Peter’s church in Leipzig. He supports the series “Organ-Point-Twelve” on the Jahn organ in St Peter’s. This organ was previously in the University Church and was saved just before the church was blown up in 1968.