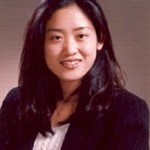 At the age of seven, she receives her first piano lessons and only three years later she is awarded the second prize at the Junior Piano Competition in Korea. In 1993, when she starts to study at the Sung-Kyul Anyang Christian University, she decides to devote herself entirely to the organ. In 1997 she obtains the ” Bachelor of Arts”.

In 2003, after further artistic studies with Zsigmond Szathmary, she obtains the diploma of the Academy of Music in Freiburg / Breisgau. Under his direction, she presently continues a special soloist training.

Since 2003, she is also studying with Christophe Mantoux at the Regional Conservatory in Strasbourg. At the same time she is taking part in organ academies and master classes with renowned organists such as Pieter van Dijk, Michael Radulescu, Jean Boyer, Olivier Latry or Ludger Lohmann. Ji-Youn Han is giving a lot of recitals as a soloist, but she is also working with various ensembles such as the Roman Choir of the Freiburg University. She has recorded concerts for the Bavarian radio and also recorded a CD.

She is appointed organist at the protestant church in Denzlingen where she is responsible for the music program of the religious worships.