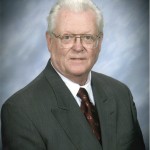 William Haller is the Professor of Organ and Organ Literature at West Virginia University.

He received his DMA from North Texas State University and both his Master’s and Bachelor’s degrees from the Eastman School of Music. He was an organ student of David Craighead, Donald Willing, Helen Hewitt, Finn Videro, and Robert Glasgow ; he studied harpsichord with Robert Parmentier.

He is presently the organist at the Worthington United Methodist Church in Worthington, Ohio and is the former organist for the Columbus Symphony and Columbus Symphony Chorus. Dr. Haller’s past honors include winning the National Organ Playing Competition in Fort Wayne, Indiana in 1965, and tying for second place at the International Organ Playing Competition in Chartres, France in 1974.

He is a consultant in planning specifications and construction of organs built by Schantz, Delaware, and Schlicker (in Ohio, Delaware, Texas, and West Virginia).

Since 1982, William Haller has been a fellow of the American Guild of Organists.