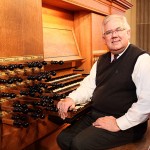 Mr Christie received his Bachelor of music degree from the Oberlin conservatory of music in organ and harpsichord. After he studied with Marie-Claire Alain in Paris, and served as organist-choirmaster for the British Embassy church of Paris.

He has also studied extensively with Harold Vogel and Bernard Lagacé. He received the Master of music degree and the coveted Artist’s diploma from the New England conservatory. He has performed throughout the United States, Canada and Europe and has soloed frequently with orchestras Boston Symphony, Boston Pops, Baltimore Symphony, Pro Arte Chamber Orchestra, and others. He was featured at the AGO national convention in Boston, Seattle and Philadelphia.

Mr Christie has often served as guest artist and juror lecturer for organ seminars, festivals and competitions (Grand prix de Chartres 2006 & 2014). He has also served as organ consultant and is responsible for mechanical action organ installations in the United States and in France. He was a featured performer at the Fifth international congress of organists held in Montreal.

J. D. Christie has served on the faculties of the Boston conservatory, Wellesley college. Mr Christie has been honored with an honory Doctor of Fine Arts degree from the New England school of Law, Boston, in recognition for his outstanding contribution to the musical life of Boston. In 2002 he was appointed Professor of music at the Oberlin college conservatory of music in Ohio.