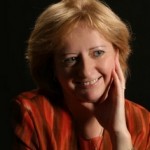 Born in Moravia, Irena Chřibková graduated from the Kromeríz Conservatory and avent on with her studies under Prof. Milan Šlechta at the Prague Academy of Arts, where she obtained the First Prize of Organ.

In 1985, she was granted a scholarship by the French Government and studied under Susan Landale at the Rueil-Malmaison National Conservatory. At the completion of her studies, she was awarded First Prize a gold medal by unanimous decision of the Jury.

She has taken part in a number of organ masterclasses lead by the most outstanding artists.

From 1988 to 1994, she was an organ professor at the Kromeriz Conservatory. She presently teaches in Prague. She was a member of the jury of several organ competitions and she lead the “Young Organiste Interpretation Masterclasses” in Ljubljana (Slovenia).

Organist of St. James’ Basilica in Prague, she has given concerts in all the countries of Europe and in Russia.

She has made recordings for the Czech radio and presently works with a Czech musical publishing house “Multisonic”.