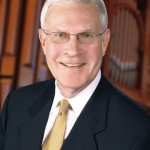 Frederick Swann is the immediate past President (2002-2008) of the American Guild of Organists, an organization of over 20,000 members in Chapters throughout the United States and several foreign countries. He is Organist Emeritus of the Crystal Cathedral and of the First Congregational Church of Los Angeles, and Organ Artist-in-residence at St. Margaret’s Episcopal Church in Palm Desert. Frederick Swann is also University Organist and Artist Teacher of Organ at the University of Redlands, and Organist for the Mark Thallander Foundation choral festivals held in various parts of the country each season.

One reviewer noted that Frederick Swann has probably presided over more ranks of pipes and stopknobs than any other organist in history. This is perhaps true given the size and prominence of the instruments with which his career has been notably associated… Riverside Church in New York City (1957-1982), The Crystal Cathedral (1982-1998) and First Congregational Church of Los Angeles (1998-2001).

Although officially “retired”, Frederick Swann continues to perform on a reduced schedule of solo recitals and in concert with orchestras and choral groups. In the past two years he has presented recitals in major churches and concert halls in the United States, England, Germany and Russia. In 2004 he was selected by the Los Angeles Philharmonic to perform the Inaugural solo organ recital on the spectacular new organ in The Walt Disney Concert Hall in Los Angeles. Prior to that, he played the inaugural recitals on the organs in Orchestra Hall, Chicago, and Davies Hall in San Francisco. In the summer of 2006 he performed on world-famous organs in Australia (Sydney : Town Hall, Opera House, and the Anglican and Roman Catholic Cathedrals, as well as the Town Hall and St. Paul’s Cathedral in Melbourne). In the 2007-2008 season Frederick Swann performed 24 solo recitals in Arkansas, California, Florida, Maine, Maryland, Massachusetts, Missouri, New York, Ohio, Texas, Virginia, and Washington, DC. In the 2008-2009 season he can be heard in California, Illinois, South Carolina, Florida, Hawaii, West Virginia, Maryland, and Arizona.

In June of 2008 Frederick Swann performed two Preview Recitals on the William J. Gillepsie Concert Organ in the Renee and Henry Segerstrom Concert Hall at the Orange County Performing Arts Center, and has recorded the first CD on this major new instrument.

Frederick Swann is sought after as a leader of organ and church music workshops and has been retained frequently as a consultant for new pipe organs, including some of the largest and most prominent in the country. His many recordings, past and present, have assisted in making his name one of the best known throughout the music world.