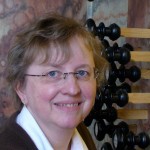 Françoise Dornier began studying music at Draguignan in her adoptive Provence region, before attending the Gabriel Fauré Conservatoire in Paris where she obtained first prize for the piano as well as first prize for organ awarded by the city of Paris.

After working with Michel Chapuis (Conservatoire National de Musique de Paris), she was awarded first prize for the organ. This was later followed by a period of advanced special study with Marie-Claire Alain, organised by the CNR in Paris to prepare candidates for international competitions. She took part in masterclasses in Belgium with Jean Ferrard, Bernard Foccroulle, Joris Verdin and Daniel Roth, as well as in Holland with Bernard Bartelink and Pierre Cogen.

In 1994 Françoise Dornier obtained first prize at the international César Franck Competition and the Charles Tournemine Performer’s Prize at Harlem (Netherlands). She holds the coveted Certificat d’aptitude (teaching qualification) for organ and the theory of music, and her teaching commitments are divided between her organ students at the Gabriel Fauré Conservatoire in Paris and teaching musical theory at the Conservatoire à Rayonnement Régional (Rueil-Malmaison) near Paris.

Françoise Dornier was awarded a silver medal by the city of Paris and has recently recorded a CD of organ music from the French romantic school.