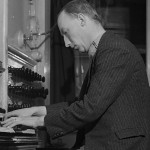 De Klerk studied at the Amsterdam Conservatory, where he studied with Anthon van der Horst, Cornelis de Wolf and Hendrik Andriessen. Its sixteenth year until his death, he was organist at St. Joseph Church in Haarlem. From 1956 to 1982 he was with the organist Piet Kee in Haarlem and played the organ at St. Bavo Church.
De Klerk in 1939 graduated cum laude organ and distinguished for improvisation.
From 1946 to 1991 conducted the choir founded by himself in Haarlem (Haarlem Concert Choir now). He also gave nearly 20 years (until 1964) in Utrecht organ lessons. In 1965 he was appointed head of the organ professor at the Conservatory of Amsterdam, later at the Sweelinck Conservatory, a position he held until 1985.

As a composer, he wrote music for organ, 3 concerts for organ and orchestra, several works for orchestra, vocal music, church music and carillon music. In 1964 and 1976, De Klerk was jury of international organ competition in the Musica Antique Festival in Bruges.