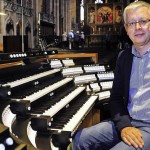 Wolfgang Seifen, born in Bergheim/Erft, Germany, in 1956, received his early musical training at the music school of the Regensburger Domspatzen and studied church music from 1973 to 1976 in Aachen, Germany.

After working as a church musician in Aachen and Nettetal-Lobberich, he became organist of the Papal Basilica of St. Mary in Kevelaer, Germany. Here, on the large Seifert organ (128 stops, 4 manuals), his international reputation as a much-sought-after improviser grew. He also worked as a choral conductor and published his own compositions.

In 2004 he was named Titulary Organist of the Kaiser-Wilhelm-Gedaechtnis-Kirche (Emperor Wilhelm Memorial Church), Berlin.

In 2006 he was engaged to compose a Missa Solemnis “Tu es Petrus” for Grand Orchestra, Choir and Organ for Pope Benedikt XVI´s 80th birthday.

Wolfgang Seifen has been a prizewinner of several improvisation competitions, including Strassburg (1990) and Nuernberg (1992). In addition to his busy, international performing schedule, he is a co-founder and teacher of the International Altenberg Organ Academy for Improvisation as well as a teacher at other international academies and courses.

Numerous recordings and television appearances have made Wolfgang Seifen’s art accessible to a large public. He has also published on the topics of organ improvisation and organ building.