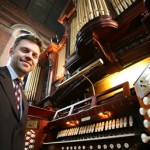 William’s WHITEHEAD solo organ-playing career took off when he won First Prize at the Odense International Organ Competition in Denmark, 2004. Trained at Oxford University and the Royal Academy of Music, London, his teachers have included David Sanger, James O’ Donnell and Dame Gillian Weir. Valuable inspiration was gained in his year as Organ Scholar of Westminster Abbey, where he played for services and occasionally conducted the choir. This led naturally on to a period as Assistant Organist at Rochester Cathedral, where he accompanied the Cathedral Choir and helped to found the new Girls’ Choir. After four years in this post, he moved on to become a Lecturer at the Royal Academy of Music, and took up a position as Director of Music at St Mary’s Bourne Street, London.

William now travels around the world playing organ concerts and giving masterclasses. 2007 has seen him in Pretoria, South Africa, Vienna, Toulouse, Berlin and Denmark. He gave his Royal Albert Hall début playing the Saint-Saëns Organ Symphony with the New Queens Hall Orchestra under Ivor Setterfield, and has made a disc of Edwardian organ music on the Herald label.

Other activities include teaching the organ at Trinity College of Music, using the historic instrument in the Old Royal Naval College Chapel amongst others. His teaching is thoroughly informed, though always led by the music. He also co-runs the London Organ Forum (www.londonorganforum.com), which puts on yearly study-days around organist-composers.