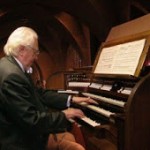 Winner of the Lemmens Institute and the Conservatory of Brussels where he worked with Paul de Maleingrau and Flor Peeters. He won the award Alphonse Mailly in 1953.

Previously, he was appointed organist of Saints Peter and Guidon before the age of 18 until his military service, which lasted two years. After that, he found himself in the church of the Rosary in Uccle for five years.

He occupied the podium of the church of Finistère for 34 years until his pension in 1993.
It takes the organist of the Church holds the Sacred Heart (The Cat).