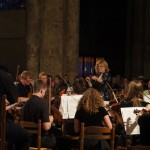 The Charlottesville High School Orchestra has won top prizes in music festivals in New York City, Chicago, Atlanta, Boston, Williamsburg, Orlando, Dallas, Myrtle Beach, and London, England, and has performed by invitation at five VMEA conferences.
The CHSO String Ensemble performed in the Florence International Youth Festival in June 2011, and also presented concerts in Tarquinia and Poggio a Caiano, Italy. The Orchestra earned a standing ovation for its performance at the opening concert of the 1994 Mid-West Band and Orchestra Clinic in Chicago.
Traveling for 10 days in Europe in 1998, the Orchestra placed second in the 27th Annual Youth and Music Festival in Vienna, Austria, and presented concerts in Hallstatt, Vienna, and Prague, Czech Republic.  In June of 2014, the CHSO String Ensemble performed for a standing room only crowd in Charlottesville’s Sister City of Besançon, France, as well as at Chartres Cathedral and the American Cathedral in Paris.
The CHS Orchestra program consists of the String Ensemble and Concert Orchestra. In addition, the CHS Symphony Orchestra is created for one concert each year by combining the top members of the CHS Wind Ensemble with the CHS Strings.
Comprised of 52 10th–12th grade string players, the String Ensemble is the more advanced of the two. The larger Concert Orchestra is made up of all ninth grade string players with at least two years of experience, as well as many upperclassmen. 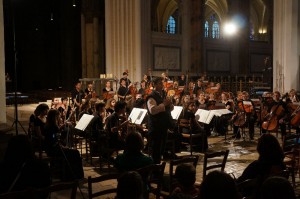