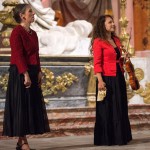 Irène ASSAYAG, virginal
After having obtained a gold medal at the CNR of Grenoble as well as the Diploma in Concert of Schola Cantorum in Paris, she is Professor of harpsichord and directs the Department of Old Music of the Conservatories of Chartres and Lucé.
Also chief of song in the Center of Baroque music of Versailles and person in charge of the study of the styles with the CRR of Paris for the Young Chorus of Paris (directed by Laurence Equilbey and Geoffroy Jourdain), she is Doctor in musicology of the 20th century.

Priscille LACHAT-SARRETE, baroque violin
Beginning the learning from the music at the Conservatoire of Paris VI, she continues the violin at the CRR of Saint-Maur-des-Fossés (gold medal), then at the CRR of Rueil-Malmaison (mention of excellence). In parallel, she obtains at the CNSM of Paris a certificate of history of the music and a price of musical culture.
Member of the Animato Quartet, Teaching at the Conservatoire of Chartres, Doctor in musicology, part-time lecturer at the Paris- Sorbonne University.

Nicolas LHOSTE, tenor
Beginning the song at the age of 8 at the Maîtrise of the Chartres Cathedral, he continues its formation at the Maîtrise of the Hauts-de-Seine, and at the children Chorus of the Opera of Paris.
Passed “man voice” he continues to sing with the Chorus of the French Army and occurs in the choruses at the Operas from Montpellier and Strasbourg.
In 2006 the Vice-chancellor of the Chartres cathedral entrusts to him the post of cantor.