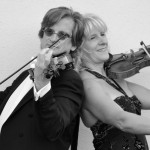 Beata HALSKA – Le MONNIER
Born in Poland, Beata Halska, has chosen France as her adoptive homeland. She has achieved a considerable international reputation. As laureate of numerous prizes obtained at numerous competitions (Neapel, Vercella, Brescia), she was given the prize of the Fondation de France and is one of the artists supported by the Menuhin and Philip-Morris Foundations.
She has attended, as guest soloist, great festivals like Menton, Radio France, Paris and Reims; well- known concert halls such as the Theatre of the Champs Elysees, the great Theater of Brescia, Milan and Lisbon, the Philharmonic af Warsaw, the Sun- tory Hall in Tokyo, GEVANDHAUS of Leipzig… and orchestra ensembles such as the Sinfonia Varsovia, the Mozarteum of Salzburg, the Pameriggi Musicali di Milano, the RTV Symphonic Orchestra of Warsaw as well as the Polish Philharmonic Orchestra… Numerous composers dedicated her their pieces. Her large discography, partly devoted to the heads of unknown works, has just been completed by a CD devoted to the composer Florent Schmitt, released in May 2015 NAXOS.
The whole artistic activity of Beata Halska was crowned in 2014 with her entry in The Academy of Sciences and Arts of Versailles.

Bernard Le MONNIER
Founder and director Soloists of Versailles, solo violin of the Orchestre National d’Île-de-France and professor at the CNR of Versailles, Bernard Le Monnier, leads a double career as a conductor and violinist.
At 14, violon solist of the Youth Orchestra of Paris, he entered the Conservatoire National Supérieur de Musique de Paris where he won the 1st prize of chamber music and violin in the classes of J. Fournier and G. Poulet, then the 1st prize for conductor at the CNR of Rueil in class of JS Bereau.
His vocation as a conductor is revealed during the Festival and Academy MUSIFLEUVES which he is the founder and director. Bernard Le Monnier quickly gets commitments both in France and abroad (Switzerland, Portugal, Italy, Spain, Poland, Japan) and recorded for radio and television.
He recorded a series of discs with Soloists of Versailles; he also led the orchestra of the Warsaw radio for the CD recording of works in world premiere of Alexander TANSMAN (five Diapason). With Daniel Spiegelberg he recorded CD Beethoven’s sonatas, Mozart and Kreisler pieces; and he just released a CD of Jewish music, with violins of Versailles.