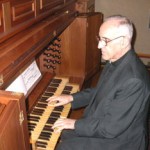 Born in Jaca (Huesca), Jose Enrique AYARRA-JARNE received the title of piano teacher from the Conservatory of Saragosse at the age of eleven. He received a diploma in organ and Gregorian Chant from the Catholic Instituts in Paris, and a University degree in theology from the Pontifical University in Salamanca.

He is official organist at the Cathedral and the Hospital de los Venerables in Seville.
Full member of the academy of the Sevillana Real Academia de Belles Artes de Santa Isabel de Hungria, Jose Enrique AYARRA-JARNE is a corresponding member of the Academias de San Fernando (Madrid) and of Ntra. Sra. De las Angustias (Grenada), and is technical music adviser for the Seville symphonie orchestra, for the Department for the Artistic Heritage of Archbishop Hispalense and for the Fondation Focus.

Jose Enrique AYARRA-JARNE has given recitals in more thon thirty countries in Europe, America and Asia ; he has been soloist with varions well-known national and foreign orchestras. He has made radio recordings for radio and television networks in a dozen countries and made records using several organs in Seville. He recently completed the recording of the full works of Francisco Correa de Arauxo.
As a researcher and writer he has published several books and many articles for specialized magazines in Spain and abroad, generally in connection with Andalusian sacred music heritage, musiciens and instruments, artistic production and archives.