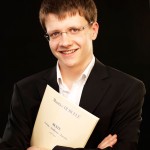 Born in 1993, the Austrian organist Johannes ZEINLER started his musical career at the local music school in his native town near Vienna. He continued his studies in organ with Klaus Kuchling and Pier Damiano Peretti, piano with Christiane Karajev and church music at the University of Music and Performing Arts Vienna. Following his graduation, he studied the organ and harpsichord for one year in Toulouse under Michel Bouvard and Jan Willem Jansen (Organ) and Yasuko Bouvard (Harpsichord).
He is currently studying for his Masters in Claviorganum at the University of Music and Theatre in Hamburg, where he is focusing on early music repertoire with Wolfgang Zerer in organ and Menno van Delft in harpsichord.

After early successes at international organ competitions in Wiesbaden 2012, Kitzbühel 2012 and Liechtenstein 2013, Johannes won the prestigious First Prize at the International Organ Competition in St.Albans in 2015.
In September 2018, Johannes Zeinler won the Grand prix at the prestigious concours international d’orgue de Chartres and the audience prize and also the special prize for the interpretation of the piece of Thomas Lacôte.

As recitalist he has been invited to major festivals and venues like the Chapel of King’s College, Cambridge, the Bavokerk in Haarlem, the Cathedral of Poitiers, the Philharmonic Hall in Essen and Notre-Dame Cathedral in Paris.