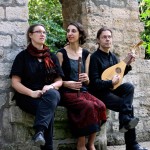 The Cyprus manuscript with those of Chantilly and Modena, one of the three most important musical collections of the very end of the fourteenth century. The style of this music, which is termed today as “ars subtilior” combines soft sweet melodies and complex rhythms. Indeed, two or three voices that make up each of the pieces are entangled with each other so refined way, using wonderfully art of syncope, it was not until the twentieth century or change continent to regain rhythm games too developed! This writing also recalls the finesse of Gothic-style architecture and magnificent cathedrals that flourished throughout the fourteenth, including that of Nicosia, capital of the island of Cyprus, it had belonged to the Kingdom France of the early thirteenth to the late fifteenth century.

Of the five remaining anonymous booklets that make up the manuscript, two are devoted to religious music, another to motets, for the last two to poetic forms (ballads and roundels virelais). These poems are written in French. They evoke courtly love, but can also have a Marian theme. Universal beauty of this music can enrich our image of that distant period.