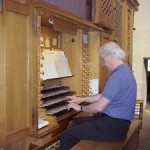 Defender of the tradition of the cantor, Arsene Bedois is among the first musicians to have partners – the early 1970s – the revival of the interpretation of Baroque music. In particular, he recorded works French, German, Spanish and Portuguese in the sixteenth, seventeenth and eighteenth centuries, critically acclaimed recordings : polyphonic Masses of the Ars Nova : the manuscript of Apt and the school of Florence (Arion) , Gregorian Chant at the time of Guillaume de Machaut : Rhythmic Office of Saint Juvenal (Erato), Office and Mass of the crazy ass Pierre Corbeil (Erato), Tournai Mass (anonymous fourteenth century) and Messe Nostre Dame Guillaume de Machaut (Erato), Music in the time of Philippe Auguste (Erato) Grand Prize of the French Academy disk, Portuguese masters (Arion) The organs of Paris (Erato) The organ of St. Thomas Aquinas (Live, SoReal-Melody) Dynasty Couperin (Ligia Digital).

Arsène Bedois has conducted numerous radio broadcasts, he leads French Baroque interpretation courses, medieval music and Gregorian (Pagani festival near Naples). He lectures on the history of music and its interpretation.

Honorary member of the advisory board of the organ of the City of Paris, he is called to act as a consultant for the restoration and maintenance of organs, in France and abroad.