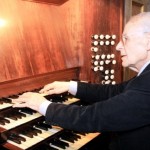 Parisian by birth and training, Antoine SibertinBlanc felt the need to move elsewhere early on. A pupil of Cesar Franck School in Paris from 1945 to 1954, he received there a multidisciplinary education from the best teachers, obtaining, under the supervision of Edouard Souberbielle, the Higher Diploma in Organ and Improvisation benefiting at the same time from the teaching of Maurice Duruflé at the Paris National Conservatory.

Having held the position of organist at the “Maîtrise de La Madeleine” and of “Maître de Chapelle” at Saint Merry since 1952, he decided in 1955 to leave Paris and take up a post in Luxembourg which he held until 1961.

When the opportunity arose to teach organ in Lisbon, at the recently Jounded Centre of Gregorian Studies, he did not hesitate.

Enjoying a favourable set of circumstances from the time of his arrival, in 1965 he was appointed Titular Organist of the newly built Great Flentrop of Lisbon Cathedral, two key ports with multiple repercussions on all levels in a country which, after a long decline, was rediscovering the wonders of its own heritage, restoring its old organs, and, at the same time, gaining access to the knowledge and practice of the great organ repertoire of the world.

Attentive to all aspects of this revival, Antoine Sibertin-Blanc, tirelessly continues his work thoughout Portugal, Madeira and the Azores, and undertakes international tours every year, throughout Europe as well as in varions countries of the former Soviet Union and Brazil.

His recordings for Erato, Columbia-EMI and Arion have received high critical acclaim.

In 1999, Antoine Sibertin-Blanc was honoured with the titre of Commander of the Order of St James of the Sword by the President of the Portuguese Republic, Jorge Sampaio.