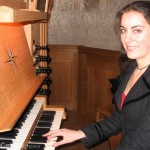 Born into a family of musicians in 1982, Anne-Gaëlle Chanon takes her first music tessons (organ, violin and piano) at the age of six at the École Nationale de Musique in Mâcon.

After 4 years of studies at the Conservatoire National Supérieur de Musique in Lyon in the organ classes of Jean Boyer and Liesbeth Schlumberger, she obtains in 2003 the irst Organ Prize, the jury attributing her unanimously an A mark.

Afterwards, she leaves for Milan to study with Lorenzo Ghielmi at the Accademia Internazionale della Musica Antica during two years, obtaining the Diploma of Ancient Music. In October 2005, Anne-Gaëlle Chanon Ovins the First Prize at the 9th International Organ Competition Xavier Darasse in Toulouse. In September 2007, she is ranking among the awardees of the 15th Paul Hofhaimer International Organ Competition in Innsbruck (Austria).

From 2000 to 2003 she was appointed organist at the St. Jean Church in Lyon (Ahrend organ), between 2003 and 2005 she was appointed at the Lanzini-dell’Orto organ in Sant’Alessandro Church in Milan. Today she is playing the Merklin-Haerpfer organ at the Eglise Réformée du Marais in Paris.

Anne-Gaëlle Chanon is giving concerts throughout Europe and Latin America. She enjoys playing music of contemporary composera such as Pierre Farago, Gilbert Amy, Bernard Foccroulle or Thierry Escaich. Her work has been encouraged by various support programs such as Déclic set up by Cultures France in partnership with Radio France and Mécénat Musical Société Générale.

Holding the certificate of proficiency, Anne-Gaëlle Chanon is appointed organ teacher at the Aubervilliers – La Courneuve Conservatory since 2006.

As a specialist of French music of the 17th century, she has also published a research report entitled L’interprète de Jehan Titelouze.