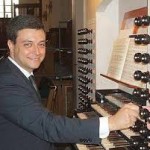 The Italian organist, Alessio Corti, graduated in piano, organ and harpsichord under the guidance of Lucia Romanini, Enzo Corti and Laura Alvini. He continued his studies in organ and improvisation in the class of Lionel Rogg at the Conservatorio Superiore di Ginevra (Superior Conservatory of Geneva), getting a “Premier Prix de Virtuosité avec distinction” and a “Prix Spécial Otto Barblan”. Prizes in several national and international competitions, were followed in 1993 by winning the Absolute First Prize at the prestigious Concorso Internazionale CIEM di Ginevra (International ICES Geneva).

Since 1983 Alessio Corti is titular at the Chiesa di Santa Maria Segreta in Milan, and since 1991 he is also titular organist at the Chiesa Cristiana Protestante in the same city, where he has performed many concert cycles, including the complete organ works of J.S. Bach and Dietrich Buxtehude. As a versatile interpreter of a vast repertoire, he is regularly invited to play at the most important international festivals, even playing the harpsichord, and is called to serve on juries of competitions.

Alessio Corti is holding the chair of composition and organ at the Conservatories of Udine and Verona, in 2001 he was appointed Professor of organ and improvisation and, as successor to Lionel Rogg, at the Conservatorio Superiore (Musikhochschule) in Geneva, where he teaches high organ perfection.

For the label Concert Alessio Corti recorded the complete organ works of J.S. Bach on 17 CD’s, greeted with unanimous Italian and foreign critical praise. In addition, he has made numerous CD’s devoted to Mozart, Felix Mendelssohn, Christmas music and made recordings on various historic organs in Italy and abroad. He recently performed in concert and released two CD’s for the inauguration of the new “Oberlinger” organ of the dell’Aula Magna dell’Università Cattolica in Milan.