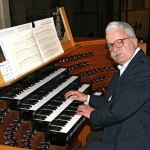 Wolfgang Rübsam was professor of Church Music and Organ at Northwestern University since 1974 upon winning the 1973 Grand Prix de Chartres, Interpretation, and University organist at Rockefeller Memorial Chapel (The University of Chicago), since 1987.

In October 1996 he accepted the professorship in Organ at the Hochschule des Saarlandes fur Musik und Theater in Saarbrücken (Germany), and additionally in 1999 the position of University Organist and Artist in Residence at Lawrence University, Appleton Wisconsin.