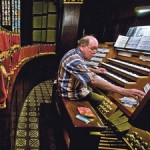 After studying composition and organ, Theo Brandmüller became professor of composition at the Saarland Academy in 1979.

Organ performances in Germany and abroad, mostly with contemporary music.

Co-director of the young composers competitions of the Musikalische Jugend Deutschlands e.V. at Schloss Weikersheim.

Numerous prizes for his works, among them a scholarship of the Cité Internationale des Arts, Paris and the Rome Prize of the Villa Massimo in 1979.

1986 and 1988 teacher and director of the ‘Table d’orgue’ at the International summer courses at Darmstadt.

Among his organ works, the Concerto for organ and orchestra (1981) is the most important.

Organ player at the Ludwigskirche, Saarbrücken since 1982.