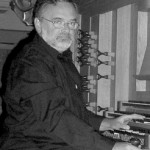 Pierre-Yves Asselin received an early training in music from his father, who was a cellist and choirmaster. At eight he was accepted as a member of the Petits Chanteurs du Mont-Royal. He took piano lessons 1963-5 with Hilda Metcalfe-Daveluy. From 1965 to 1972 he studied theory, organ, and improvisation with Raymond Daveluy when he became interested in organ building and began working closely with the builders Karl Wilhelm and Hellmuth Wolff. He studied with John Grew at McGill University 1972-5 and earned a Bachelor degree in Music. He was assistant organist at Saint Joseph’s Oratory 1965-75 and was responsible for the maintenance of its organs 1968-75, and taught counterpoint 1974-5 at the UQTR. He was also organist at the Church of St-Pascal-Baylon (1968-9) and at Westmount Park United Church (1973-4).

On a Canada Council scholarship Asselin settled in Paris in 1975 and studied with Marie-Claire Alain while pursuing graduate research in organ and harpsichord building at the Laboratoire d’acoustique at the faculty of sciences of the University of Paris. He also became sub-organist at the Church of St-Germain-des-Prés and at the Church of St-Germain-en-Laye. In 1983 he received a PhD from the Paris University. He taught at the Paris Cons (1978-91) and also taught at the Lyons Cons 1983-91. In 1978 he recorded the Messe propre pour les couvents by Couperin and in 1985 he made an organ transcription of Mussorgsky’s Pictures at an Exhibition, which he recorded along with the toccata from Widor’s Symphony No. 5.

An expert in tuning or the temperament of organs and harpsichords, Asselin lectured on this subject during festivals and has been an adviser and consultant to several recording enterprises. He wrote Musique et tempérament (Paris 1985), of which François Filiatrault wrote: ‘To my knowledge, it is the only book on the subject to tackle in a clear and direct manner an endless amount of fascinating details’ (Le Tic-Toc-Choc, vol 6, May 1985). In 1991, during a sabbatical year, Asselin directed his research towards creating a computerized program for ear training (Syncordia), and to Orgue 2000, which aimed to integrate an electronic system with a traditional organ. Both projects were based in Montreal and were funded by the Lyons Cons.

Syncordia International Inc was established in 1992 by Asselin to develop and enhance traditional pipe organ building techniques and is a leader in production and tuning of pipe organs.