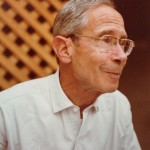 He served as organiste titulaire of the Cathédrale Saint-Pierre in Geneva from 1942 to 1994.