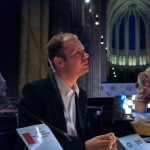 Mithra Van Eenhooge started studying music at the Conservatory of his hometown Bruges.

He also studied at the Academy for Music and Dance in Ghent.

He studied organ with Ignace Michiels at the Royal Conservatory of Ghent and obtained his masters degree with the highest distinction in 2008. Consequently he studied with Éric Lebrun in Paris whom he obtained the Prix de perfectionnement.