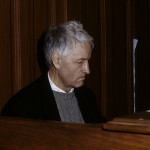 Louis THIRY is a former pupil of André MARCHAL, one of the great instigators of the organ revival in France.

Louis THIRY was awarded the First Prize at the National Superior Conservatory of Music in Paris in the class of Rolande FALCINELLI. His activities are divided between teaching, concerts, radio broadcasts, and recordings in France and abroad.

His repertoire extends from the 13th to the 20th century and he is particularly interested in medieval music with its very rich characteristics. Jean-Sébastien BACH – whose ART OF THE FUGUE and WELL-TEMPERED CLAVIER he bas recorded – intensely sollicits his spirit of research.

Louis THIRY also gladly performs music of contemporary 20th century composera. Among them he is particularly interested in Olivier MESSIAEN, whose music he helped to be made known in concerts throughout Europe.

Besides his activity as a soloist. Louis THIRY performs often with different singera and instrumentalists. He is titular organist of the historical Lefebvre organ (18th Century) in the Chapel of the University Hospital Center «Charles Nicolle» in Rouen.

Louis Thiry has made numerous recordings among which those dedicated to the composer Olivier Messiaen were awarded the Prize of the Président of the Republic and the «Shock» of the Monde de la Musique.