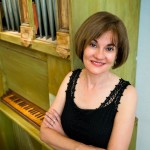 A native of Winston-Salem, North Carolina, Kimberly Marshall began her organ studies with John Mueller at the North Carolina School of the Arts in 1974. Her early interest in French music took her to France where she worked with Louis Robilliard (1978-79) and Xavier Darasse (1980-81) before returning to North Carolina to complete her undergraduate studies with Fenner Douglass in 1982.

Kimberly received a full scholarship from the British government to pursue graduate studies at the University of Oxford (1982-86), culminating with a D.Phil. in Music for her thesis, Iconographical Evidence for the Late-Medieval Organ. During her time in England, in 1985, she won first prize in the St. Albans Organ Interpretation Competition, leading to a contract with the BBC and a recital on the Royal Festival Hall series.

In 1986, Kimberly was appointed Assistant Professor of Music and University Organist at Stanford, where she presided over organs by Fisk (dual-temperament, 1984) and Murray Harris (1901). Working with her associate, Robert Bates, she built a thriving program of organ studies and research, leading to the creation of ORCAS (Organ Research Center at Stanford). Her students at Stanford include Annette Richards, David Yearsley and Erik Goldstrom.

In 1991, Kimberly was awarded a Fulbright Scholarship to continue her research and teaching at the Sydney Conservatorium in Australia. She was recruited by the Royal Academy of Music to serve as Dean of Postgraduate Studies (1993-6). Her main objective while at the Academy was to develop a new Masters degree in Advanced Performance Studies, awarded in conjunction with Kings College London. She also taught select organ students and presented lectures and concerts stemming from her research.

From 1996-2000, Kimberly was a project leader for the Organ Research Center in Göteborg, Sweden, where she taught and performed, including an inaugural recital on the large meantone organ in Örgryte Church in 2000. Under the aegis of GOArt, she organized the conference “The Organ in Recorded Sound”, and has edited the proceedings of this, the first-ever conference devoted to sound recordings of the organ.

In 1998, Kimberly was appointed Associate Professor of Music at Arizona State University, where she oversees the graduate organ studio and presides over the instrument by Paul Fritts (1992). She was promoted to an endowed position as Full Professor in 2002 and served as Director of the School of Music from 2006-2012.

Kimberly Marshall spent the spring of 2005 on sabbatical in Pistoia, Italy. She researched early Italian organ music and performed on many historical organs, including those in Roskilde Cathedral (Denmark), the St. Laurenskerk, Alkmaar (Netherlands), the Jacobikirche Hamburg, as well on as the famous Hildebrandt instrument in Naumburg, Germany, which Bach examined in 1746. During the summer of 2006, she presented concerts and workshops on early music in Sweden and Israel, and she was a featured artist for the 2007 Early English Organ Project in Oxford and the Festival for Historical Organs in Oaxaca, Mexico.

Kimberly has numerous publications reflecting her eclectic interests. She has lectured on her research for the American Musicological Society, the Royal College of Organists, and Trinity College, Dublin. Her edition of articles on female traditions of music making, Rediscovering the Muses, was published by Northeastern University Press in 1993. She contributed entries for the Grove Dictionary of Music 2000 and for the Oxford Dictionary of the Middle Ages (2012). Her anthologies of late-medieval and Renaissance organ music were published by Wayne Leupold Editions in 2000 and 2004.

Kimberly Marshall’s compact disc recordings feature music of the Italian and Spanish Renaissance, French Classical and Romantic periods, and works by J. S. Bach. Her most recent CD celebrates the music of Arnolt Schlick on the 500th anniversary of its publication (2012). A CD/DVD set entitled A Fantasy through Time was released on the Loft label in 2009, receiving effusive reviews, as did her recording of Chen Yi’s organ concerto with the Singapore Symphony on the BIS label (2003). She has also made a recording of works for organ by female composers, Divine Euterpe, that includes music by Fanny Mendelssohn Hensel, Elfrida Andrée, and Ethyl Smyth.

Kimberly Marshall has been invited to play throughout Europe, including concerts in London’s Westminster Cathedral and St.Paul’s Cathedral ; King’s College, Cambridge; Notre-Dame, Paris, and Chartres Cathedral ; Uppsala Cathedral, and the Dormition Abbey in Jerusalem. She has performed on many historical organs, such as the Couperin organ at Saint-Gervais, Paris, the Gothic organ in Sion, Switzerland, and the Cahmann organ in Leufstabruk, Sweden. She especially enjoys tailoring programs to the styles of the instruments she plays, as is evident from her recordings of Italian and Spanish music on historical organs. Her interpretations are informed by research into obscure repertoire and performance practice, although she does not limit herself to early music. While at Stanford and the Royal Academy of Music, she gave performances of organ works by Ligeti in the presence of the composer, and she has been an advocate for music by Margaret Sandresky, Dan Locklair and Ofer Ben-Amots. She is attracted to the organ by its vast possibilities of timbre and complex development since its invention in the third century BCE. Her work reflects this enthusiasm for musical creativity and historical awareness.

Kimberly is an active member of the American Guild of Organists, having served as a member of the Committee on Professional Education (COPE) for seven years (2006-2013). She has been a recitalist and workshop leader during 8 National Conventions : Dallas 1994 ; New York 1996 ; Denver 1998 ; Seattle 2000 ; Denver 2002 ; Los Angeles 2004 ; Minneapolis 2008 ; Washington 2010. (She is currently under contract to present a recital for the Boston Convention in 2014.) A review of her performance for the convention in July 2010 extolls her as “a multi-faceted musician” who “pushed the organ to its limit with her virtuosic demands in playing and registration… This was a royal performance by one of our royalty !”

Performer, scholar, and educator, Kimberly Marshall is a committed advocate of the organ. She works to promote the instrument in both local and global communities. She is regularly consulted by churches searching for organists and music directors, as well as by institutions seeking advice on instrument installations. She is the advisor on organs for the Musical Instrument Museum (MIM) in Phoenix and has made videos in Guanajuato (Mexico), Toulouse (France) and Florence (Italy) for their exhibits. An authority on the organ’s rich history over the past 2000 years, she is devoted to continuing this tradition of artistic ingenuity into the next millennium.