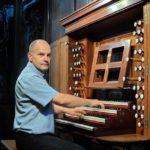 Born in 1968, Jean-Pierre GRIVEAU studied at the conservatory in Toulouse where he is awarded by seven First Prizes in 1989/90 : counterpoint, analysis, side-reading, organ (in the class of M. Bouvard and J.-W. Jansen), as well as unanimously awarded prizes in harmony, orchestration and chamber music. One year later, at the Orleans Conservatory, he obtains the unanimously awarded First Prize in organ (class of F.-H. Houbart).

Thanks to his pluridisciplinary studies he has today become a renowned  multi-faceted musician.

Since 1989, he has given numerous recitals all over France, in the Antilles, the Indian Ocean, in Czech Republic and several times in Netherlands, Switzerland, Slovakia, Italy and Japan…

At the time of his concerts at prestigious organs or as part of international festivals, as much as at the keyboards of modest instruments, Jean-Pierre Griveau reveals a « true sens of the organ » : by a varied and coloured  repertoire, and « a sensitive and elegant technique » wich now exudes serenity, he shows off reciprocally  the tones of the instruments and the musical speech of the works.

He is performing in duo with the trumpet player Bernard Petit-Bagnard since 2003 ; the critics points out their excellence and perfect osmosis. Also, in 2011, he has created with the soprano Corinne Sertillanges a Duo Organ & Voice which is already unanimously recognized.

After obtaining his superior teaching license in 1992, he was appointed at the Conservatory of the French island La Réunion during six years before coming to Orleans Conservatory in 1998, where he is teaching composition since 2002.