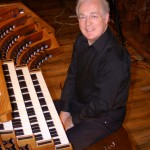 Jean Ferrard studied organ at the Royal Conservatory of Music in Brussels and privately with Marie-Claire Alain in Paris. He won several prizes in international organ competitions and furthered his education with a degree in musicology from the Free University of Brussels.

Jean Ferrard’s activities encompass all aspects of the organ and organ performance. In addition to his recordings, concert performances and seminars, he has served as producer of “Le magazine de l’orgue” for the Belgian national classical radio station (Radio3) since 1975. He published editions of early organ music (Lambert Chaumont, François Roberday, for Heugel, Paris ; Peeter Cornet for VNM, Utrecht).

In 1985, after twenty years in broadcasting (during which he had become Head of Music of RTBF3), he decided to devote himself exclusively to teaching, performance and musicological research.

Currently professor of organ at the Royal Conservatory of Music in Brussels, Jean Ferrard devotes a large part of his time to an energetic role in the conservation of the old organs of Wallonia, published the “Inventory of the Organs of Brabant Wallon” and is an advisor for the restoration of historical organs.