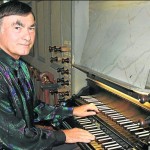 Gunther Kaunzinger, professor at the Musikhochschule Würzburg since 1974, was “artist in residence” at the National Shrine ‘and director of the organ department at the Catholic University of America in Washington, DC from 1970 to 1978. He learned his work especially with the French masters of the organ : Marie-Claire Alain, Maurice Duruflé and Jean Guillou (for whom the art of improvisation was a very natural component of their education). Previously, Gunther Kaunzinger had acquired a solid musical training in Germany (which also understood the piano, composition and direction).

His performing international career took off after Kaunzinger have won awards at six international organ competitions. His numerous recordings also earned him several awards, including the Deutsche Schallplattenkritk ‘in 1980, 1982 and 1988. In 1988, Sulzbach-Rosenberg of the city awarded him its Cultural Award.

Kaunzinger founded in 1978 Meisterkurse for the interpretation of the organ of Würzburg. These courses found their permanent home in his villa “Capriccio” in Helmstadt near Würzburg in 1983, the year in which he inaugurated a series of concerts called “Concerts in Capriccio.”

Several instruments in Germany and other countries were built according to his plans that require the construction of modern and individual organ. In recognition of his merit for the organ in the Stiftsbasilika Waldsassen he was appointed honorary organist in 1989. In 1990 he published the first complete edition original works for organ by César Franck (Schott / Wiener EU) that has interested much criticism.