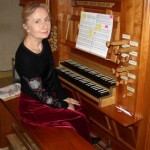 Elizabeth Ballon has long studies at the Paris Conservatory, returning at the age of 12 in “special theory” Berthe Duru and ending analysis class at Jacques Casterede. Meanwhile, three writing classes (Maurice Duruflé, Alain Weber, Marcel Bitsch) and the organ class of Rolande Falcinelli, where she obtained a second organ prices in 1971 after a first prize in counterpoint in 1967.
His musical life was then held in Angers, Mulhouse and Saint Maur des Fosses, where she taught writing and continued to practice the organ.
She currently holds the organ of the Protestant church in Vincennes.