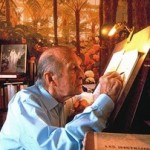 Daniel-Lesur (his real name was Daniel-Jean-Yves Lesur) was born in 1908 into a musical family.

At the Paris Conservatory, which he entered at the age of eleven, he studied with Jean Gallon (harmony) and Georges Caussade (fugue). It was, however, outside this institution that he met his most influential teacher, Charles Tournemire (with whom Daniel-Lesur’s mother, Alice Thiboust, an organist, had in earlier days studied composition and the organ). At the age of nineteen, he became deputy organist on the Cavaillé-Coll organ – a former incumbent being César Franck – in the church of Saint Clotilde in Paris. In 1935 he started to teach counterpoint at the Schola Cantorum in Paris. The following year he founded, with Yves Baudrier, André Jolivet and Olivier Messiaen, the Groupe Jeune France, which aspired to regain the spiritual drive of primordial music and to rehumanise art by rejecting the worldly neo-classicism then in vogue. After the Second World War he held eminent positions with French Radio and Television, at the Schola Cantorum in Paris (which he directed between 1957 and 1962), and at the Ministry of Culture. He died in 2002.

Daniel-Lesur had many points in common with Olivier Messiaen, whom he had met at the age of twelve on the benches of the Paris Conservatory and with whom he was to rub fraternal shoulders as far as the French Institute, where both were to be elected. Among those points were: teachers in common; the strong imprint of Tournemire; an outpouring spirituality; the organ as a laboratory for creation; monodic plainchant as an ideal of modality. In this domain, Daniel-Lesur struck out on an individual path: “I have always thought modally. Subsequently I was receptive to both the diversity and the immense possibilities of polymodality. Messiaen progressively enriched his music with elements taken from various remote types of music. For myself, I have remained more attached to the French tradition”.

Daniel-Lesur produced an important output in which all genres are represented, from opera to orchestral music, not forgetting chamber music. Yet the common denominator of his compositions seems to have been the pneuma (the human breath), and more particularly the voice, in all its dimensions: anthropological, via his fascination for extra-European music or the ambitious project of the Groupe Jeune France; existential, through the quest for the essentials of vocality, whether sung (his numerous songs) or instrumental ( Fantaisie concertante , for cello and orchestra); sacred, through his vocal production ( Le Cantique des Cantiques ) ; and poetic, thanks to his chosen bards (Heinrich Heine, Claude Roy and Cécile Sauvage, the mother of Olivier Messiaen)