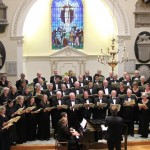 BATH CHORAL SOCIETY
Bath Choral Society (founded 1887) is a lively amateur mixed choir of about 110 voices, enga- ging professional orchestras and soloists and presenting a wide range of sacred and secu- lar repertoire. The choir performs four or five concerts a year in Bath, including two perfor- mances of Messiah in Bath Abbey during early December.
Will Dawes has been the Musical Director since September 2011, following in the footsteps of Matthew Bale, who retired that year after 23 happy and productive years with the choir. He has been responsible for the programming of all the concerts since January 2012, including a performance of Monteverdi Vespers, an eve- ning of Haydn The Seasons and a concert inclu- ding James MacMillan The Seven Last Words from The Cross and Fauré Requiem. In 2011 the choir also sang Vaughan Williams A Cambridge Mass with guest conductor Alan Tongue and two acclaimed performances of Messiah with Jeremy Summerly.
Encouraging all ages, the choir has been parti- cularly successful in attracting younger singers over the last few years and has in place a bur- sary scheme for singers under 25 which helps with membership and music costs and also provides complimentary individual singing les- sons.
Every two years the choir tours abroad and performs varied programmes in some of the great musical cities of Europe.

Organist – Nicholas THORNE
Nicholas THORNE read music at Oxford and was an ‘Academical Clerk’ in the choir of Magdalen College.
He has been Director of Music at Alliance High School, Kenya, Lord Williams’s School, Thame, and at Kingswood School, Bath. In all of these locations and many more he has worked as pianist, organist, singer, conductor and artist. He is a deputy organist in Bath Abbey and a Pump Room Trio pianist.
As a local accompanist he is involved with the Bath Festival, the Mid Somerset Competitive Festival, and many of the choirs from Bath and the surrounding area.
He has also given concerts as a soloist in Thomaskrirche Leipzig , Bruges and Budapest while continuing to perform with his band in the world.