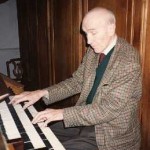 André Fleury was born in Neuilly-sur-Seine, France. He received his musical training as a private student of Henri Letocart (a former student of César Franck), and later, of André Marchal and Louis Vierne. At the Paris Conservatory, he studied organ with Eugène Gigout and received a first prize in organ performance and improvisation under Gigout’s successor, Marcel Dupré, in 1926. André Fleury also studied composition with Paul Vidal.

As a composer, André Fleury wrote numerous works for organ, many of which have not been published yet, however. He also performed extensively throughout Europe. André Fleury premiered several important organ compositions, such as the organ sonata of Darius Milhaud, Maurice Duruflé’s Scherzo op. 2, as well as La Nativité du Seigneur by Olivier Messiaen (the first integral performance of this organ cycle, after the premiere by Jean Langlais, Jean-Yves Daniel-Lesur, and Jean-Jacques Grunenwald).

Among his students were Bernard Gavoty, Pierre Cochereau, and Daniel-Lesur.