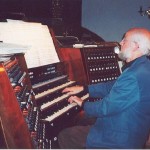 Anders Riber was from 1973 to 2007 organist of the Cathedral of the Aarhus Cathedral – and therefore one of the main actors in the scene of the city of classical music.

A graduate of the Royal Academy in 1961. Organ degree in 1964. A student of Gaston Litaize in Paris in 1964, Anders Riber is 1965 to 1967 studying with Professor Georg Fjelrad to whom he would later succeed as organist of the cathedral.

From 1965 to 2002, Anders Riber teaches organ at the Royal Academy of Music and also worked as an examiner in the country’s music academies in Oslo and other music schools.

Anders Riber has performed as a soloist in Denmark and abroad. He was a member of the Danish Society of Organists music critic at Aarhus Stiftstidende a number of years.

Frequent juror for organ competition in Odense, Chartres, Lucerne, Poznan, Warsaw, Korschenbroich, Calgary, London and Vilnius, he served on the program committee for the city of Aarhus orchestra (1971-87).