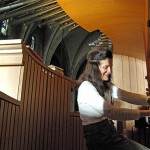 Born in Sofia, Yanka Hekimova began her career as a pianist and at a very early age performed recitals and orchestra concerts in her native city.

She concluded her musical studies in both piano and organ at the prestigious Tchaikovsky Conservatory in Moscow. Settled in Paris since then, Yanka Hekimova has devoted herself exclusively to her career as an international concert artist. She has been invited to many festivals around the world. Her concerts have been widely broadcasted, both by radio’s and TV’s.

In addition to an extensive repertoire, Yanka Hekimova has written, from orchestra and piano works, many transcriptions for organ, namely by Vivaldi, Haendel, Mozart, Liszt, Wagner, Saint-Säens, Tchaikovsky, Ravel.

In 1998, in collaboration with the City of Paris, ARGOS and with sponsorship from the Fondation Hippocrène, Yanka Hekimova conceived and performed a series of animated concerts for children. These were received with such enthusiasm by the young audiences that they have since become an annual event.

Yanka Hekimova has recorded several CD’s, two of them featuring the organ of Saint Eustache (Paris) include her transcription of Mozart’s “Jupiter” Symphony as well as major original organ works. Published by Philips-Universal, the live recording of the “Symphonic Dances” by Rachmaninoff, performed by Yanka Hekimova and Jean Guillou (who wrote this transcription for two organists) has been highly acclaimed by magazines such as “Le Monde de la Musique”, Répertoire” and “Diapason”.

Yanka Hékimova has recently published the 6 Sonatas by J.S. Bach on two CD’s recorded at the Tonhalle in Zürich.

In 2006, a new CD of the renewed organ of Saint-Gabriel in Paris has been recorded, featuring works by Purcell, JS Bach, Mozart, Schumann, Franck and Vierne