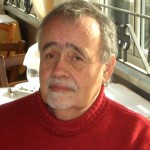 He played for the opening of many restored historic organs, including those of San Petronio in Bologna and Gabler Weingarten, he recorded several albums, some of which are dedicated to Andrea Gabrieli in solo concerts Haydn (for organ and harpsichord), Haendel concertos for organ and orchestra Paër and Salieri, recent compositions and Riccardo Castagnetti, harpsichord, all sonatas Giovanni Benedetto Platti.

He lives between Parma and Arcola (La Spezia).