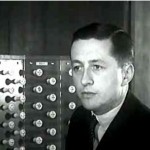 Born in Victoriaville (Québec), on December 23, 1926, he received, as early as 1937, his first musical lessons from his father, Lucien Daveluy, who was organist and director of music in Victoriaville.

In 1959, he was the first north-american organist to participate and win the Haarlem (Holland) International Extemporization Contest.

In Montreal, Raymond Daveluy was successively organist at St. Jean-Baptiste church (1946-1951), Immaculate-Conception (1951-1954) and St. Sixte (1954-1959) before being appointed, in 1960, first organist of the prestigious Beckerath organ in the basilica of St. Joseph Oratory.

As a composer, Raymond Daveluy wrote many works for organ now published by Éditions Jacques Ostiguy and Éditions Europart-Music and being played in many countries. He is a certified composer from the Canadian Music Center. He has composed nearly fifteen works for organ. He also has composed a sonata for trumpet and organ, a quintet for piano and strings, and choral works. Many of his works have been recorded, namely his concerto for organ and orchestra and, lately, his five sonatas for organ on SRC label.

Raymond Daveluy is the member-founder of «Mélodistes Indépendants» (Independant Melodists), a group of creators devoted to accessible modern music, who has received remarquable public support upon its creation in 1995 and who has recently published a book Pour l’amour de la musique (For the love of music).

On top of his career as composer and recitalist, Raymond Daveluy was, until 1988, organ and extemporization teacher at both Trois-Rivières and Montréal Conservatories, two schools he was once the director, the first one from 1970 to 1974 and the second one from 1974 to 1978. Among its pupils, there are Pierre-Yves Asselin, Paul Crawford, Mireille Lagacé, Lucienne L’Heureux-Arel and Rachel Laurin.

His important contribution to the Canadian musical life has been recognized many times: member of the Order of Canada (1980), Canada 125th-Anniversary Medal (1992), «Fellow» (Honoris Causa) from the Royal Canadian College of Organists (1993) and «Honorary Member» of the Fédération québécoise des Amis de l’orgue (2002).