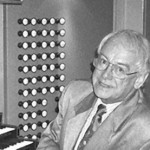 Born in 1935 in Copenhagen, graduating in 1954 organist diploma Danish Royal Conservatory in Copenhagen in 1955 and began a concert career.

In 1957, he studied with Professor Anton Heiller (Wien).

In 1959, scholar of the French state, he was a pupil of Gaston Litaize (Paris), and then continued his studies at the National Conservatory of Paris in the “foreign” class for the direction of Robert Blot Orchestra.

Organist (Domorganist) at the Copenhagen Cathedral (1972).

Niels Henrik Nielsen has played throughout Europe, USA, Japan, Singapore and Taiwan, and has become an expert in romantic music and one of the best Danish interpreters of Olivier Messiaen. He has participated in various radio and television, recording numerous CDs.