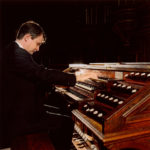 After completing his musical studies at the conservatories in Nantes and Angers, and at the Conservatoire National Supérieur de Paris, Michel Bourcier has maintained a wide variety of activities ranging from interpretation, liturgical accompaniment and promotion of contemporary music to musical analysis and pedagogy.

He teaches organ at the Conservatoire de Nantes and, since 2007, is the organist of the Nantes Cathedral.

Michel Bourcier performs regularly as a soloist on France’s most famous organs and also particularly appreciates accompanying choirs and smaller vocal or instrumental groups. He has been invited as guest soloist by the Orchestre National des Pays de Loire, the Orchestre du Capitole de Toulouse, the choir of Radio France, baroque ensemble Stradivaria and vocal ensemble Les Eléments of Toulouse, among others.

Though interested and active in all repertoires, his curiosity towards today’s music has led him to work with many contemporary composers. He has played or given first performances of works by Jacques Lenot, Christophe Looten and Valéry Aubertin, whose organ works he first recorded in collaboration with Peter Farago, Marie-Ange Leurant and Éric Le Brun, to critical acclaim. A long-standing association with Jean-Louis Florentz, (d. 2004), led to him giving first performances of Laudes and Standing on the sun (dedicated to him). A detailed study of this composer’s organ works by Michel Bourcier (Jean-Louis Florentz and the organ) is soon to be published. Internationally recognised as a major expert on this repertoire, he is regularly consulted by organists and conservatories for advice on its performance.