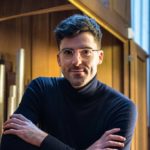 Born in 1988 in Normandy, France, Matthieu Odinet studied organ with François Ménissier and Olivier Houette. He studied musical analysis, basso continuo and early music, and took harmony courses with Jean-Baptiste Robin at the Conservatory of Versailles. He also plays the piano and the harpsichord.

After earning an Organ Diploma at the Conservatory of Rouen, he was accepted to the Conservatoire National Supérieur in Paris, where he studied organ with Michel Bouvard and Olivier Latry, and music theory and applied analysis with Michaël Lévinas. He was awarded a National Professional Musician Diploma in 2014, a first prize in organ by a unanimous jury, as well as a first prize in analysis with highest honors.

He dedicated a research essay to the comparative analysis of both the organ and orchestral arrangements of L’Ascension by French composer Olivier Messiaen. At the Conservatory of Paris, he studied improvisation with Thierry Escaich and Philippe Lefebvre, and took classes in composition, didactics, Gregorian chant and ethnomusicology. He has performed in masterclasses with some of today’s finest organists, including Lorenzo Ghielmi, Louis Robilliard and Wolfgang Zerer. He received a Bachelor’s degree in musicology from the Sorbonne University.

At only 21 years of age, he was appointed titular organist of the Alfred Kern organ at Notre-Dame des Blancs-Manteaux (Paris). He regularly performs in recital, both as soloist and as continuo player.

In addition to his musical career, Matthieu Odinet has experience in cultural administration. He graduated from Sciences Po Paris, ESCP Business School, and from the Ca’ Foscari University in Venice, Italy. He is now in charge of patrons and major donors of the Paris National Opera, at the AROP, the Friends of the Paris Opera. He also teaches at Sciences Po Paris and at the ESCP School of Business.