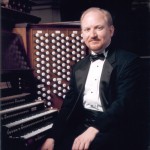 Martin Jean has risen to the highest ranks of the world’s concert organists and is recognized widely as a brilliant, warmly communicative artist and readily appealing personality. As the winner of two of the most prestigious organ competitions in the world, he has concertized extensively throughout the United States, Canada and Europe.

In 1986 Martin Jean was awarded first prize at the international Grand Prix de Chartres competition, held bi-annually at the Chartres Cathedral, France. As part of this prize, he was invited several times for concert tours of France, England and Luxembourg, where he played at the cathedrals of Poitiers, Chartres, Orléans, Chichester, Oxford and St. Alban’s. He also appeared in concert at Radio France in Paris as part of a recital series commemorating the 50th anniversary of the death of Louis Vierne, a performance which was broadcast live over much of western Europe. A testament to the respect which he has earned in France because of his win there, he has been invited by the competition’s board of directors to be one of the judges for the 1998 Chartres competition. He was a featured performer at the 2004 national convention of the American Guild of Organists held in Los Angeles and will be at the organizations’s 2006 national convention in Chicago.

In 1992 he won first prize at the National Young Artists’ Competition in Organ Performance, held bi-annually by the American Guild of Organists, in Atlanta, Georgia, at its national convention. Since then, he has played over 40 recitals, including appearances at the 1993 International Congress of Organists in Montréal, the Meyerson Symphony Hall in Dallas, the Naples Performing Arts Center in Florida, the Riverside Church in New York City and as soloist with the National Symphony Orchestra at the Kennedy Center for the Performing Arts in Washington DC.

He holds the Doctor of Musical Arts degree from the University of Michigan where he studied with Robert Glasgow and was also a holder of the Regents’ Fellowship. Additional coaching has been with David Craighead and Russell Saunders. Dr. Jean has commercial recordings on the Raven and Gothic labels.