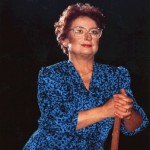 Born into a family of musicians in Saint-Germain-en-Laye, near to Paris, she studied music at the Conservatoire National Supérieur in Paris, where she won four Premier Prix, followed shortly after by several awards in international competitions.

She has toured extensively throughout the world, giving over 2000 concerts, either recitals or as a soloist with orchestra.

A very sought-after pedagogue, she is in charge of the “Cycle de formation professionnelle” for organists at the Conservatoire National de Région in Paris.

The list of her recordings is impressive : more than 200 records and over 60 CD’s. Let us cite only the famous “complete works” : J.S. Bach, Buxtehude, Franck, Jehan Alain. Her recordings have earned her more than 15 “Grands Prix du Disque”.

The town of Lübeck awarded her the Buxtehude Prize, crowning her action favouring Early German Music. Budapest gave her the Franz Liszt Prize. In Copenhagen, she was awarded the Leonie Sonning Foundation Music Prize. On this occasion, she was awarded with the Danish Dannebrog Order.